All Collections
Form Design and Behavior
Repeating Groups of Fields

Set up groups of fields that can repeat by allowing your respondent to select "Add another" or entering a set quantity.

Written by Diony McPherson
Updated over a week ago

If you want to set up a form with a group of fields that repeat, there are two ways you can do this:

The first option is especially handy for things like expense claims where you may capture transaction details including, but not limited to: vendor, description, amount, and date. The responded may then select to "add another" transaction including a fresh copy of the same fields in a new group.

The second option lends itself well to a potentially large number of groups of fields, such as asking how many people will attend a conference for registration purposes and then having groups for name, email, phone, etc. repeat X times, where x is the quantity specified by the respondent.

Both options are viable for either example, among others, so it's mostly a matter of personal preference.

1. Repeating groups of fields with an "Add another" option

To create a question group that is repeated as needed by respondents:

At this point, your group should look similar to the following:

Now, select the Duplicate Group option that appears in the upper right-hand corner of the group when you hover over it. This will duplicate the entire question group.

For example, suppose you want to allow a maximum of 5 transactions to be submitted with an expense claim form. To allow up to 5, but not exceeding 5, you would duplicate the group 4 times.

Why one less than the maximum amount of groups I want?
The first group is not a duplicate of another group. You created it in step 1 at the beginning of this section. Every group after is duplicated based on that base group. So, you start with 1 group no matter what. To get a maximum of 5 groups (continuing the example above), you would need 1 + 4 groups. Thus, you need to duplicate the base group 4 times.

The location of the Duplicate Group option is shown in the image below.

Once you've got your duplicated groups to your liking, insert a section break in between each group of questions. 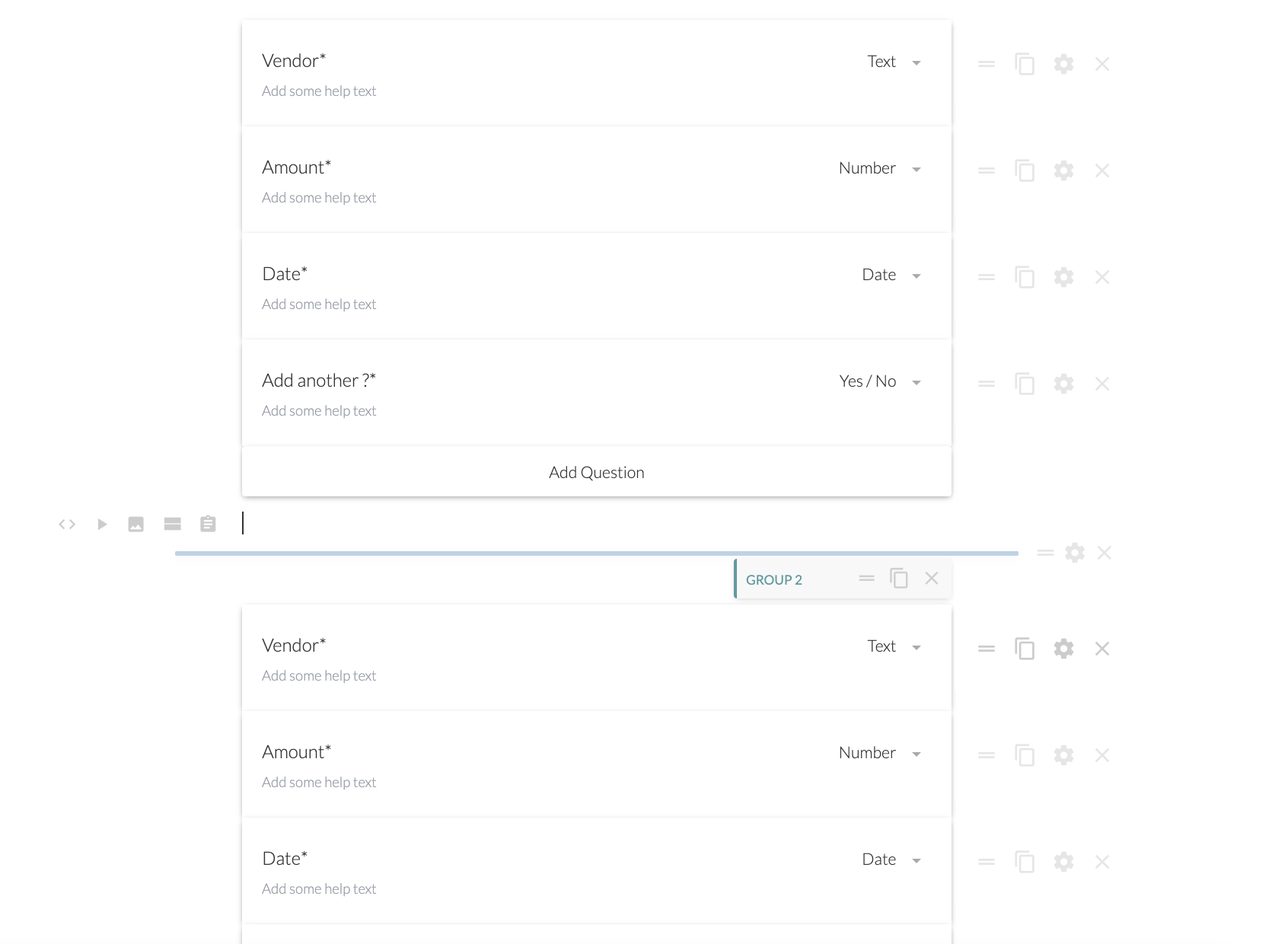 Configure the break by selecting the gear icon to the right of the line. Make sure the break is set to On the same page and set the section visibility logic such that the group below the break only appears if Add another? is equal to Yes from the previous group.

You're all set! Give your form a test run and let us know if you run into any bumps.

There isn't currently a way to allow for unlimited repeats. That is, you must create and duplicate question groups in the editor up to the maximum amount of groups you want available to the respondent.

For example, if you want to allow up to 20 repeats, you must set up 20 groups as described in the above instructions.

2. Repeating groups of fields based on quantity

To create a question group that is repeated as many times as the respondent wants:

Caution: Do not click Add Question at the bottom of the group that asks the respondent to specify how many they would like. You want the questions that you'll duplicate to be their own distinct group.

If you've been following along, your form should look similar to the following image: 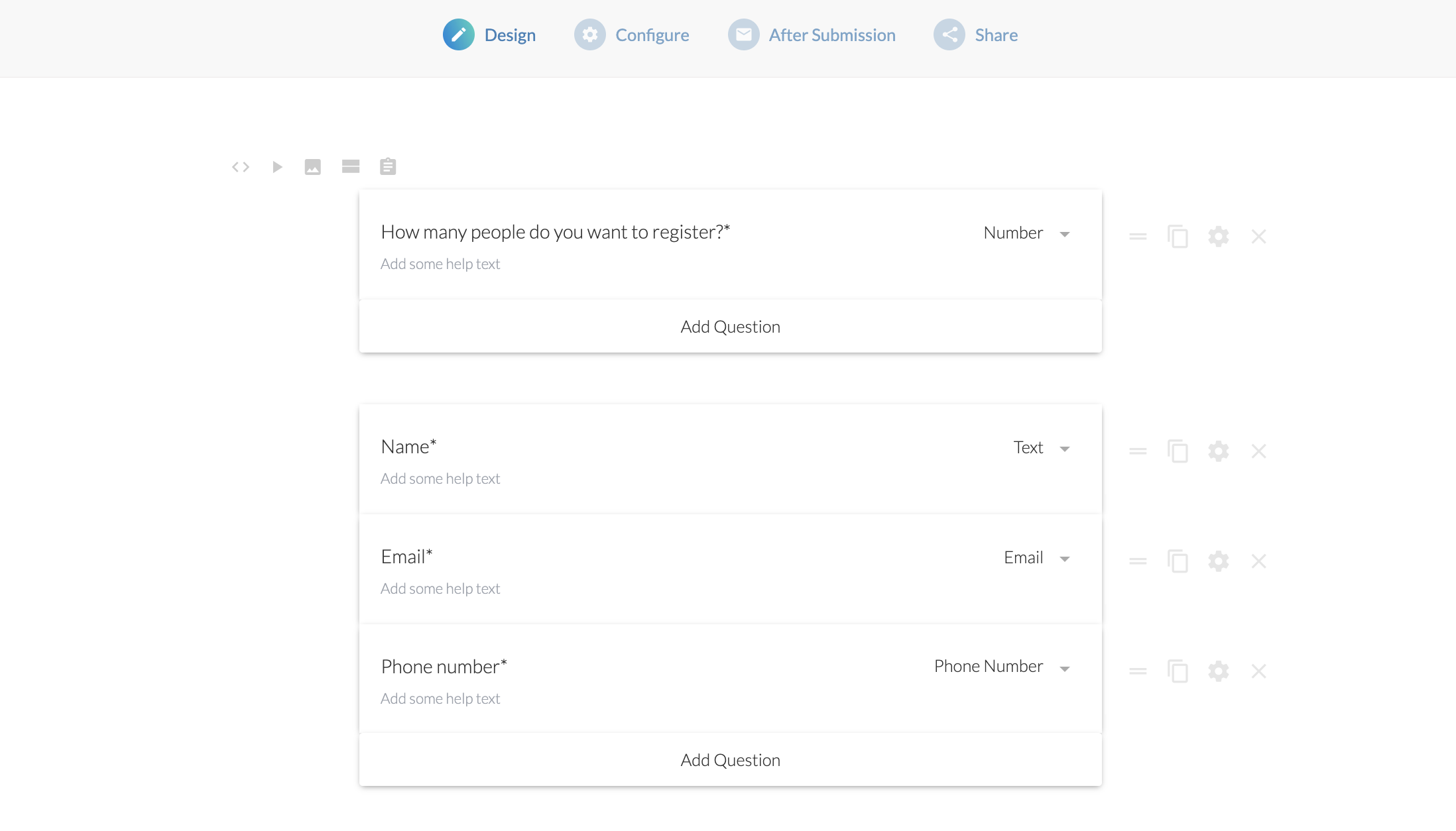 Hover over the group of questions that you want repeated and select the Duplicate option in the upper right-hand corner of that group. This will copy the entire question group.

Duplicate that group one less time than the maximum amount of times you want the respondent to be able to answer that group of questions. For example, building on the example in the image above, suppose you want no more than 5 people to register per for submission. You would select Duplicate 4 times. This would give you the base group plus 4 duplicates, for a total of 5 identical question groups.

Hovering over the question group brings up options in the upper right-hand corner. 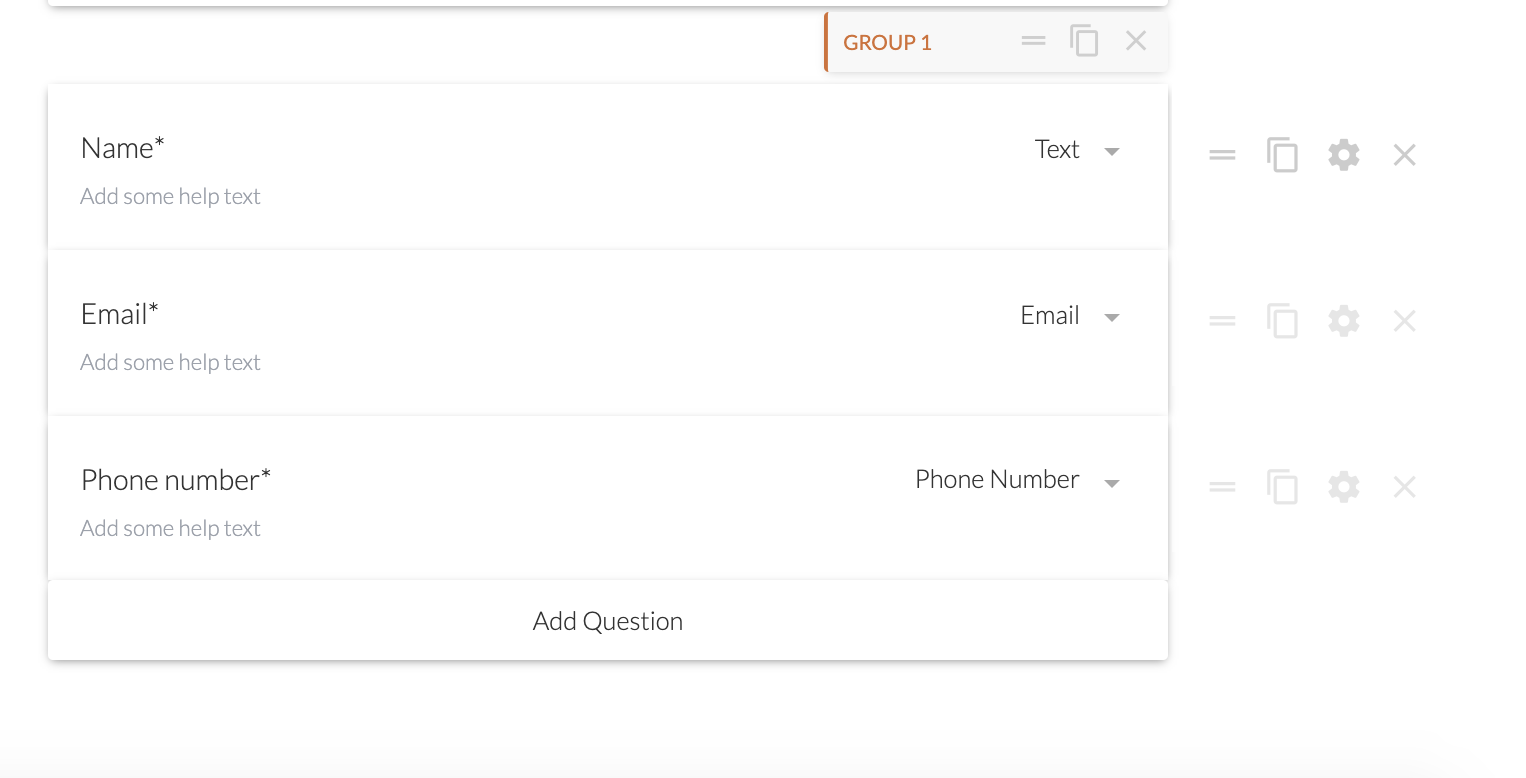 Now that you've duplicated your groups, add section breaks in between each question group, including after your "how many" question group.

The blue lines in the below image are section breaks. 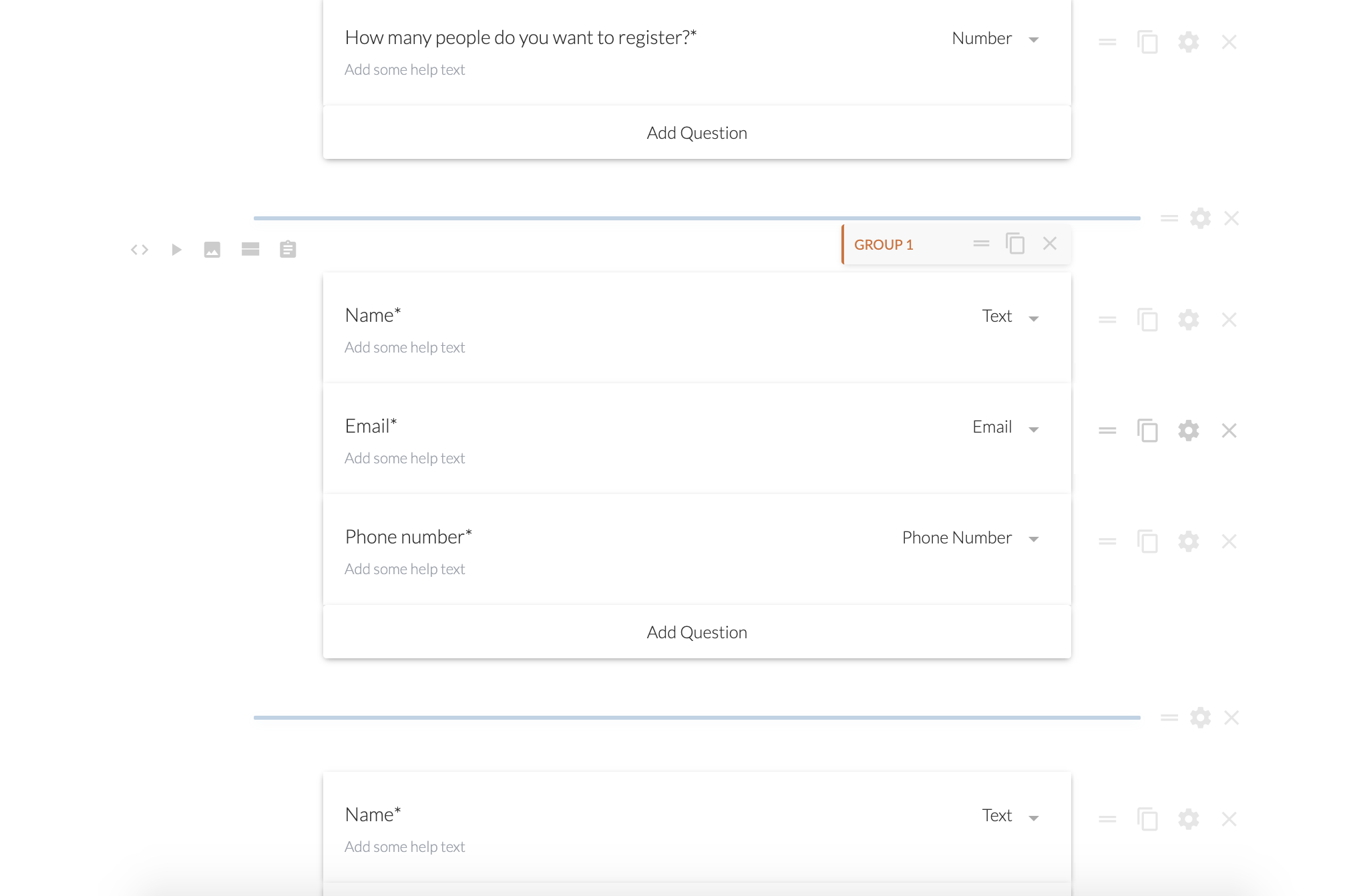 Select Configure by selecting the gear icon to the right of the section break. Display the content below the break On the same page.

For the visibility logic, set it such that the group only appears if it is less than or equal to the quantity specified by the respondent.

That's a little confusing, so let's break it down.

Suppose you have created enough groups that up to 10 people can be registered for an event for a given form submission. Suppose a respondent has chosen to register only 5 people at this time.

On the section break before a question group, you will want to specify visibility logic such that the answer to your "how many" is more than 0.

Below, the question group below this only appears if the respondent wants to register at least 1 person, but less than 2 people. So, they only want to register 1 person. 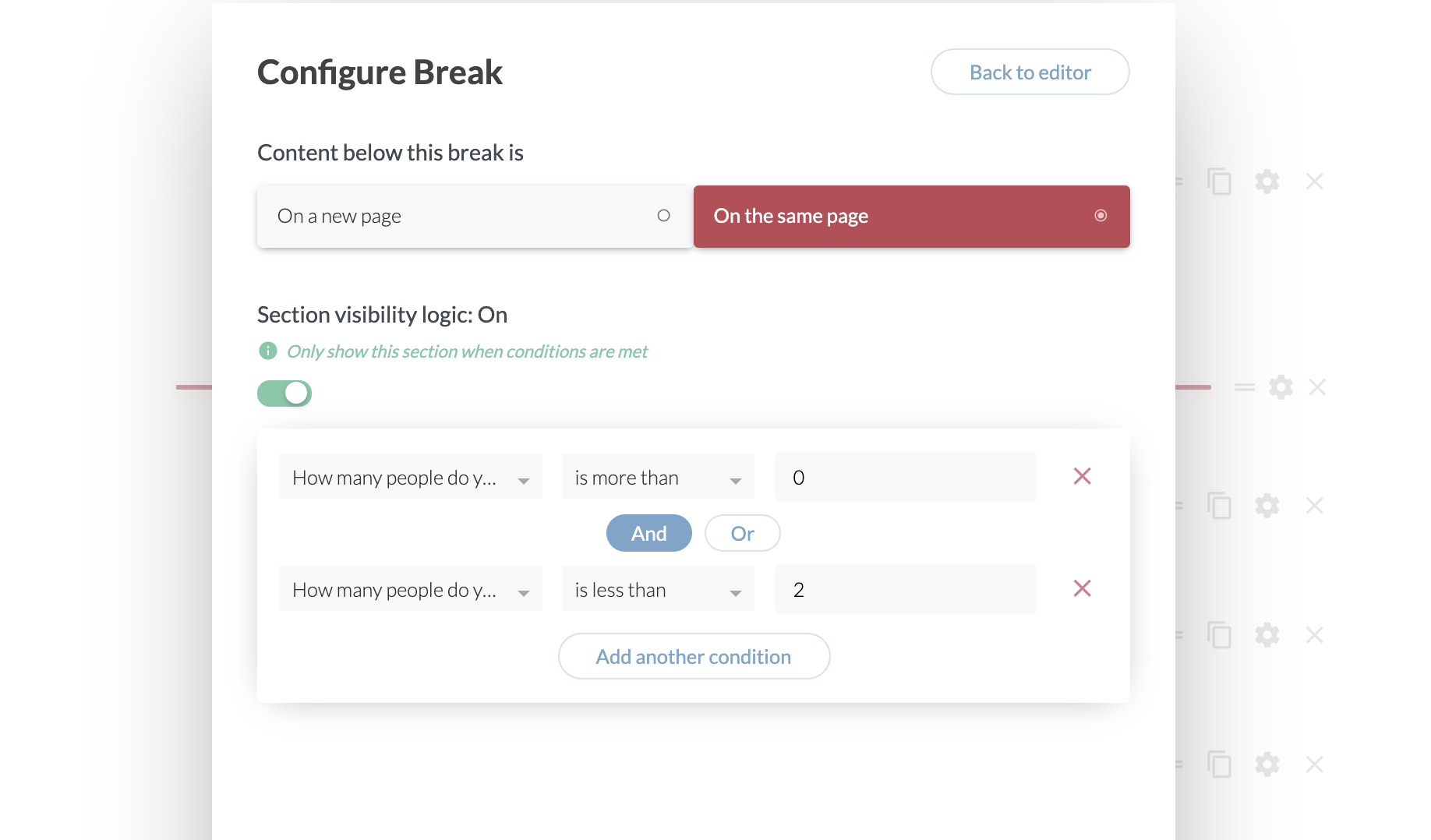 You're all set! Give your form a test run and let us know if you run into any bumps.

Caution: Every section break must contain the is more than 0 condition in the visibility logic. The editor assumes no answer given to the "how many" question is equivalent to 0.

There isn't currently a way to allow for unlimited repeats. That is, you must create and duplicate question groups in the editor up to the maximum amount of groups you want available to the respondent.

For example, if you want to allow up to 5 repeats, you must set up 5 groups as described in the above instructions.

Did this answer your question?